How to make kanda batata poha recipe for a healthy tea time snack or breakfast! Poha, Pohe, Poha is a snack made from flattened rice. kanda batata poha where kanda means onion, batata means potatoes and Poha are rice flakes. 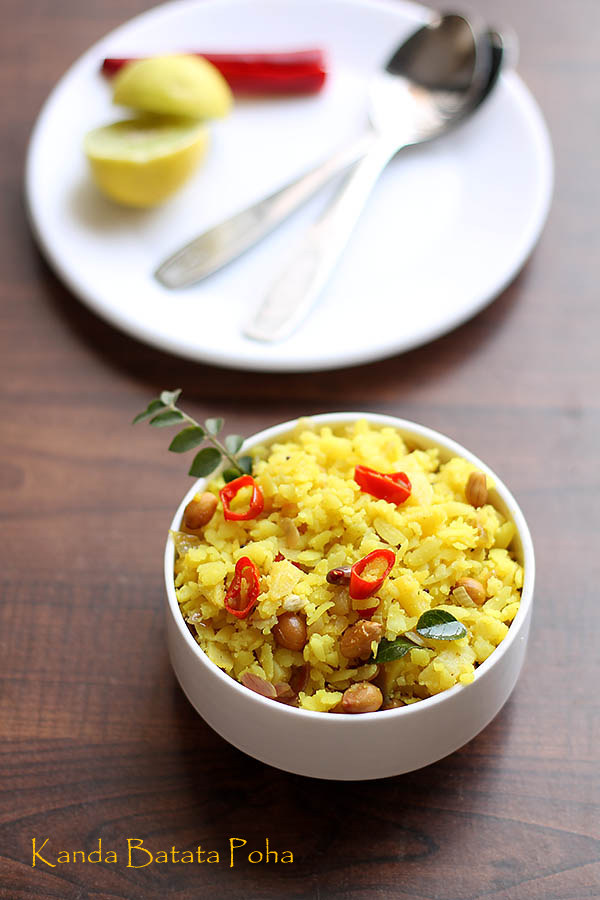 Kanda batata poha origins from Maharashtra and is famous traditional dish made in Mumbai, Pune, Kolhapur, Solapur and other regions in India. Even South Indians make them but they add a dash of grated coconut which draws the thin line between them. This is one of my old post have modified the pictures and recipe both.

Poha are rich in iron hence always serve with lime juice. Lime juice helps in absorption of iron from poha. Poha is made with mild Indian spices and peanuts. Great to have them early morning for breakfast as it’s power packed with proteins.

My mother used to make poha for us although she dislikes poha. My hubby loves poha hence made this specially for him. Even I am a poha lover. In fact I have made a slight change to the dish. Potatoes have fried them earlier and then mixed in poha. This process helps in saving time and the potatoes taste nice and crispy in poha. 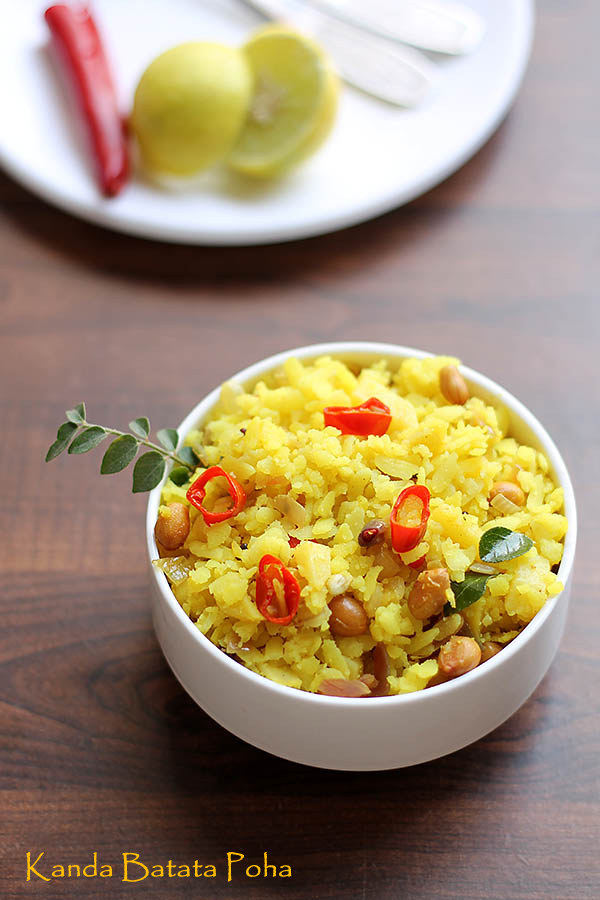 Save Print
Prep time
5 mins
Cook time
10 mins
Total time
15 mins
Kanda Batata Poha Recipe are famous Maharashtra snack made from flattened rice flakes.
Author: Maria@flavorsofmumbai.com
Recipe type: side
RecipeCuisine: Indian
Serves: 3
recipeIngredient (used american measuring cup, 1 cup = 250 ml)
How to make the recipe?
Notes
1. If the poha is sticky cook for some more time. If poha is dry then add few drops of water.
2. While pounding the peanuts don't make their powder. Just crush them lightly Or add them as they are with skin Or without skin.
3. You could also add a dash of grated coconut to give that extra flavor.
4. Instead of frying you could add boiled potatoes. Then it becomes all the more low fat snack.

Generally curry leaves are added while tempering. But I prefer to add half while tempering and rest of them later. This process gives a nice flavor to poha.

You could also chop curry leaves if you wish to.
Nutrition Information
Serving size: 4 people
3.2.2708